Aquila Liquid Propulsion Development Aquila from the Ground Up

The EV-2 Engine consists of a Liquid Rocket Motor that is powered by a Liquid Methane and Oxygen mixture. It is capable of 1500 pounds of thrust and is currently being integrated into an upper stage design that will be capable of a thrust to weight ratio of 10 to 1. The engine is currently being built in Riesi Siciliy, Italy, by Meccanotecnica Riesi SRL a mechanical engineering company that specializes in high precision machining and has extensive experience in both the oil and gas field as well as the aerospace domain. The main engine was primarily developed during the Fall semester of 2010. The team at the time known as the Thrust Chamber Team consisted of the following members in alphabetical order:  John Capriolo, Oreste Giusti, Jason Jayanty, Michael McVicker, Gauri Patel, and Christian R. Pinto Rey. The team was tasked with the design, development, and eventual manufacture of the EV-2 main engine. The team also accomplished many secondary goals laying down the infrastructure for future cold/hot static fire testing. The entirety of the teams work can be seen below.

The new EV-2 team called Liquid Propulsion Development (LPD) for the Spring Semester 2011 consists of John Capriolo, Oreste Giusti, Jason Jayanty, and Gauri Patel. The tasks for this semester have been to rapidly complete many of the loose ends in the regenerative cooling systems which were rather difficult to finish. Specifically in the regenerative cooling system the cooling channels which can be seen in the Figure 1 and the cooling jacket needed to be redesigned in order to account for the necessary tolerances required for operation during static testing. Once this was completed the team moved towards creating detailed drafts of the chamber liner and methane dome to send off to our manufacturing partner Meccanotecnica Riesi SRL. After this the team sent out purchase orders for all the remaining materials and began manufacturing the various components. One component manufactured by Jason and Steve was the spark torch igniter which can be seen in picture below. We can see here the small screw in nozzle on the right with a small handle that will be removed during the assembly process.

To get a better idea of the spark torch igniter design, two CAD screenshots are displayed below showing the nozzle(Figure 3) and the body of the igniter(Figure 4). 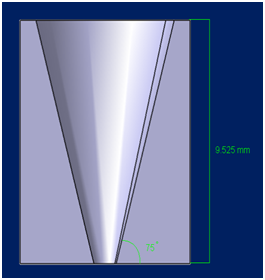 Another major task for the LPD is the need to create a comprehensive design for upper stage integration with the future solid rocket Icarus 4. The team has worked on creating a mass budget to fit the required max of 150 pounds, design of flight tanks, all structural and payload requirements. Furthermore, the team has pushed ahead and joined up with Ross Rickards of team Icarus to help facilitate the continuation of the integration efforts. With his help the team has been able to better streamline design methodologies as well as communication efforts between the two very busy teams. With our efforts combined we have been able to tackle even larger goals.

One such goal is to facilitate inter-collegiate cooperation which would call upon different colleges and upper classmen to help with the design and implementation of the entirety of the Aquila Project. Currently the team is working closely with Aviation Maintenance Science(AMS) department to work on the development of its bulkheads. They have been a fundamental in carrying the design forward by donating to us the required materials for the construction of EV-1 fins, test strips for concept validation of the bulkheads for EV-2, and the manufacturing of the mobile test platfom.  Below is an early concept of the bulkheads (pictured as disks) integrated into a very different payload and avionics section concept. 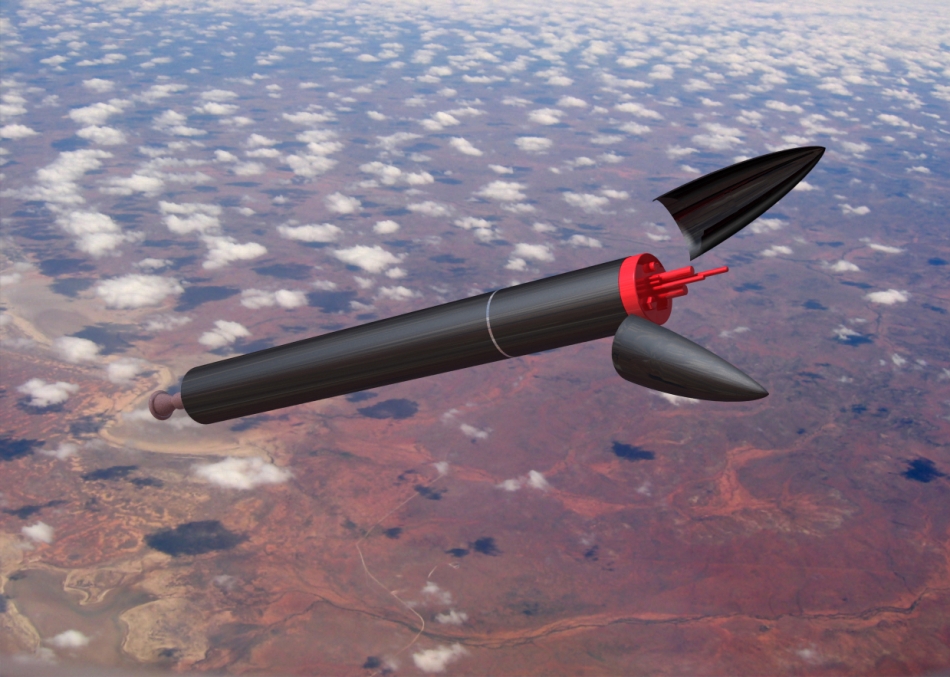 Rocket in flight with payload concept.(Fins have not been designed)

Since the hot fire of EV-1 we have decided to integrate the engine with a rocket. This rocket is to compete in the 6th annual Intercollegiate Rocket Engineering Competition in June of this year. This will prove to be an ambitious goal, but one in which we will succeed in. The journey began at the start of the spring semester, mid-January. The team of three has taken long strides toward completing the rocket. Jeff Latham tackled the regenerative cooling design (Figure 1), redesigned the propane and nitrous oxide manifolds (Figure 1), and did preliminary configuration of the feed lines.

As Jeff worked on the feed system and engine, Miguel Rivera designed the overall structure of the rocket, refined the propellant tanks (Figure 2) designed by Steve Murphy, and determined the size required for the pressurizing tanks. The overall structure includes the bulkheads, stringers, fins, nose cone, and body tube material. Outstanding guidance from team lead Steve Murphy has allowed this process to move quickly and efficiently.

Steve is also managing the design and production of EV-2, its integration with a rocket, and the entire engine testing components. Meccanotecnica Riesi SRL, a high output machine shop and prototyping company in Italy, is presently manufacturing intricate components of EV-2. This is largely due to team member Oreste Giusti who inquired about possible sponsorship due to the close relationship he built during his summer internship. They will be producing the Methane Manifold and the Chamber Liner for the team by early April. These two parts will be completed through the use of a variety of machines including a 5 axis CNC machine. The required tolerances of EV-2 require a high level of precision that can only be achieved through a combination of industry experience as well having the right tools for the job.

On December 10th, 2010, the ERPL Team and Team Aquila had their first successful hot fire test of the EV-1 Rocket Engine.  More tests are scheduled for the future, so stay tuned…

This blog follows the journey of a senior design class project as they complete preliminary design, detail design and testing of an LOX/Methane rocket engine. The project entails the construction of a regenerative cooled third stage engine, dubbed Escape Velocity II(EV-II), that will sit on top of a sounding type rocket. This blog follows the successes and failures of our project as we progress through our endeavor of low earth orbit insertion. Preliminary design work was completed on the EV-II by performing cold flow and hot fire test on the EV-I. The EV-I was developed by club members from the Experimental Rocket Propulsion Lab (ERPL) at Embry-Riddle Aeronautical University. Their endeavor began in the fall of 2009 with an idea by Steve Murphy.  Finally on Friday, December 10, 2010 EV-I was successfully hot fired in a test cell at Embry-Riddle. Progress leading up to a few months prior to the hot fire can be viewed on ERPL’s website. Data collected by the Aquila Team will be used to ensure proper development and verify theoretical calculations of  EV-II.